Whenever I look into the internals of web browsers and the protocols that make the web work I usually end up feeling uneasy. The number of parts that can and do go wrong makes it incredible that anything we build works at all. The against-all-odds robustness comes from the fault tolerance and backward compatibility engrained into key parts of web stack. The browser will always do its best to output something useful whether it’s parsing a badly authored document, unable to retrieve dependencies or 10 years out of date.

I think this fundamental property of the web gets forgotten. Our aspirations as developers are becoming increasingly aligned with expectations set by other platforms. We’re particularly jealous of the environment smart phone developers have because as modern web developers we want to build dynamic, slick applications too. There are loads of astonishingly smart people building tools right now that allow us to just that, it’s a really exciting time to work in this industry. However, I don’t think the current crop of tools; Angular, Ember, Knockout et al. are where the future of in-browser web development lies because they’re not inherently robust.

I worry when I see sites that make JavaScript the lynchpin of getting at content now and for the future. It's putting that single point of failure at the most fragile part of the stack.

The additional complexity of the code we’re delivering and extra work we’re shifting into the browser means users might not get anything when even a small problem occurs. It’s not directly an issue with the aforementioned tools but the way in which we currently build our sites; an empty document body should not be acceptable. Our sites content should at least be accessible whether it’s requested across a crappy network connection or being run in an old browser. We must embrace the fact that the web browser is nothing like a smart phone runtime because there’s so much we can’t control!

I’m not here to preach the philosophy of a luddite, I really don’t think we have to deliver plain HTML sites. We can definitely tackle the fragility we’re introducing into our sites but to do so we need to rethink some of the techniques we use and there are some really interesting tools coming through that provide that shift, my favourite of which right now is the React library from the developers at Facebook and Instagram.

React is exciting because it introduces a different way of building and delivering interactive interfaces. React provides a straightforward means to creating adaptive-hybrid or isomorphic web applications. The initial HTML can be generated on the server (without any headless browser shenanigans) for React to intelligently transpose itself onto when loaded in the browser.

React is not an MV-whatever framework, it only handles the ‘view’ but not with templates in the usual sense. React views are not chunks of text to be dumped into the page but instead create a lightweight intermediate representation of the DOM, a technique more catchily known as the “virtual DOM”.

Using an intermediary instead of reading and modifying the actual DOM allows a difference algorithm to calculate the fewest number of steps required to render each state. This in combination with other performance-boosting features such as clever event delegation and batched DOM updates means React has astonishing performance.

React allows applications to be written expressively–interactive by default–but can also inject robustness back into dynamic sites. It’s clever and there’s little, if any, performance penalty for it.

The example application I’m going to create is a departure board for stations on the London Underground using the TrackerNet API or “Tube Tracker” for short.

The application has only four states: displaying a welcome, loading or error message and displaying the departure board for a station. For the certified enterprise level developer the application can be expressed with the following flowchart: 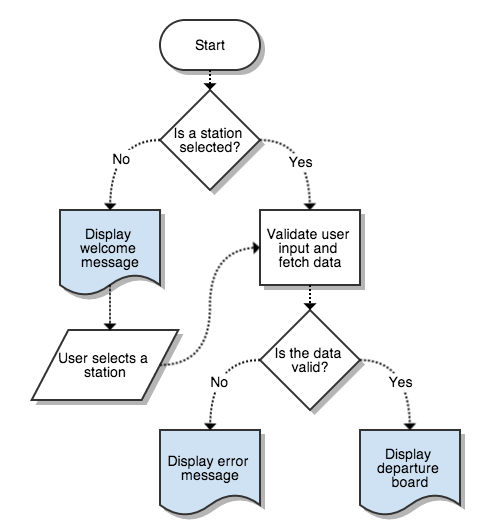 Rather than go line-by-line through the process of building the application I’m going to cover a few more general tips and processes that are useful when using React for the first time.

The TrackerNet API is a product from a previous era, it’s poorly documented and is missing data for stations and entire lines. The issues with TrackerNet have been well covered by Chris Applegate and tackled as part of his Open Source When’s My Transport project. Fortunately it looks as though this decrepit API will be replaced soon.

React applications can be prototyped quickly in the browser without any initial tooling setup. I prefer to write my components with the optional JSX syntax which allows them to be authored in a manner that closely resembles HTML. If you feel that embedding HTML in JavaScript is wrong that’s understandable given the years of separation but I’ve found it to be more productive and makes visualising structure easier than using the plain JavaScript methods. A basic document including React and the JSX transformer (available on the Facebook CDN) is all you need to get going:

Setting the type attribute of the script element to anything other than text/javascript allows non-JavaScript data to be embedded in a page. Because the script element is not intended for the user it has no visual presence on the page.

React applications are assembled with components arranged in a hierarchy. The easiest way to architect the application is to work out the responsibilities for each part of the interface and draw a box around it. Ideally each component should only handle one thing so any complex components should be split into smaller sub-components. 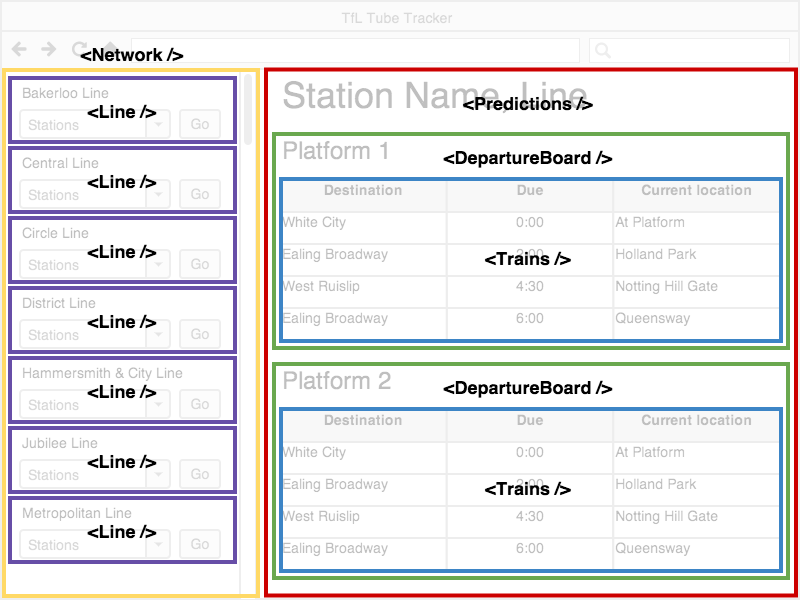 The Tube Tracker wireframe can be deconstructed and assembled into the following hierarchy:

React has two kinds of data; “props” that are passed between components and “state” that is stored within the component itself. A component can change its state but its props are immutable, which is a good feature because there should ideally be a single source of truth. A key architectural decision when designing a React app is deciding what data is required by each component and where the source of truth for that data should be. 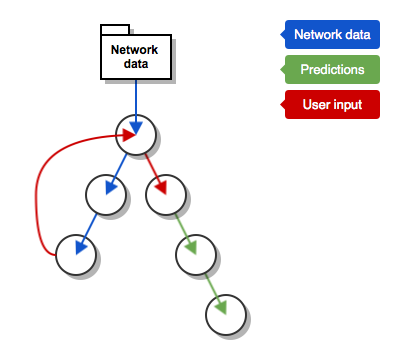 The Tube Tracker only requires 3 pieces of data: the network data (lines, stations etc), the user selected line and station and the predictions data received from TrackerNet.

The network data is consumed by the Network and Line components to provide lists of stations and also TubeTracker to validate user input. It’s a large amount of data so it’s actually better to handle it externally and pass it into the application.

Lastly, the TrackerNet predictions data is used by Trains, DepartureBoard and Predictions but not TubeTracker so it should be stored in Predictions.

But there’s a problem, data needs to be passed back up the hierarchy. When the user input is captured in the Line component its ancestor, TubeTracker, needs to know about it.

Thinking in React is a more detailed overview of component hierarchies and the differences between props and state is well worth a read.

Because data can only flow down the component hierarchy that means another technique must be used to pass data up. There are two main ways of doing so.

When a component only needs to share data with its direct ancestor then providing a callback prop is the most simple solution. React automatically binds component methods to each instance so there’s no need to worry about maintaining scope.

For further reaching notifications a publish/subscribe system will be more flexible and easier to maintain. This can be done simply with native events or a library such PubSubJS, binding and unbinding with a components lifecycle methods.

Components have a concise API to hook into their lifecycle; creation (mounting), updates and destruction (unmounting). Unlike other approaches to building dynamic interfaces this functionality is baked into the component definition. In the component communication example above I used the componentWillMount and componentWillUnmount methods to add and remove event listeners but there are more methods available which allow granular control over a components props and state. In the Tube Tracker app I also use the following methods:

Here’s one I made earlier

So we’ve set up an in-browser environment, deconstructed our UI into components, worked out what data is required, where the data should be stored and how it is shared within the application so it’s time for a demonstration! 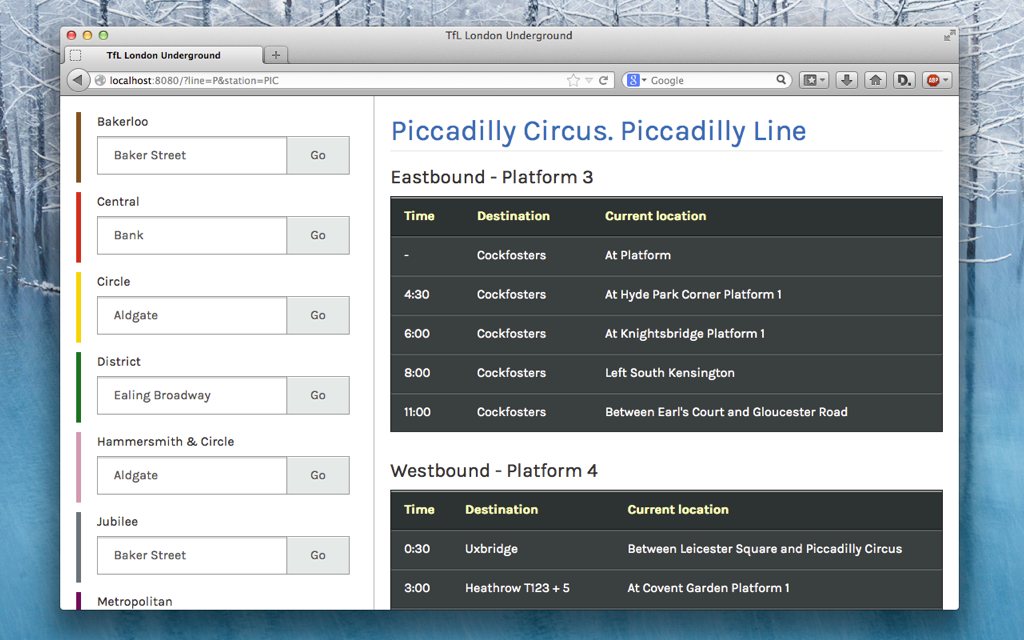 I’ve used Express to setup a quick HTTP server to deliver the static files which will be further utilised in the following parts of this series. You can test the app right now (note: It’s running on a free account so this link may not be reliable) or head over to GitHub to check out the source code.

In part 2 I’ll be covering optimising the app; setting up the tools to optimise the code for the browser. Please leave a comment or send me a tweet, I’d love some feedback.